It’s time for another episode of “stupid research.”

Not that the research itself is stupid.

But that those of us who understand the value and benefits of natural movement, and how most “normal” shoes get in the way of letting your feet do what’s natural, are stunned that people need research to prove something obvious:

Using your body naturally is better than restricting it.

In this episode, Harvard’s Dr. Daniel Lieberman, whose research showing about how barefoot runners put less force through their joints than runners in shoes kicked off the barefoot running boom in 2009, just published a new study about footwear.

And the results are not good for “normal” shoes.

In this study published in Nature and described on the Harvard website and Lieberman and others examined the effect of “toe spring.”

Toe spring is the upward curve in a shoe, from the ball of the foot to the tip, that’s built into modern athletic shoes and many dress shoes as well.

Shoe designers add toe spring to stiff-soled shoes to accommodate the fact that the sole prevents your toes from bending towards your knee as your foot is about to push off the ground. 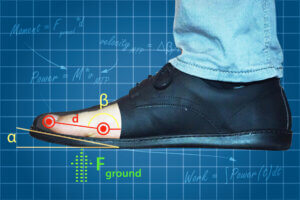 So, what did they discover?

By limiting the amount of movement in the foot, the foot gets weaker:

“It stands to reason that if the foot muscles have to do less work, then they’re probably going to have less endurance given that many thousands of times a day you push off on your toes,” said Lieberman, the Edwin M. Lerner II Professor of Biological Science and senior author on the paper. The work on toe springs is described in Scientific Reports.

The researchers say this potential weakness could make people more susceptible to medical conditions like plantar fasciitis — a common, hard to repair, and painful inflammation of the thick, web-like band of tissue that connects the heel bone to the toes.

And this limitation could lead to injuries and medical problems:

The researchers say this potential weakness could make people more susceptible to medical conditions like plantar fasciitis — a common, hard to repair, and painful inflammation of the thick, web-like band of tissue that connects the heel bone to the toes.

“One of the biggest problems in the world today of people’s feet is plantar fasciitis,” Lieberman said. “We think that what happens is that people are relying on their plantar fascia to do what muscles normally do. When you get weak muscles and the plantar fascia has to do more work, it’s not really evolved for that and so it gets inflamed.”