Could a new form of foot binding be the secret to better running?

I don’t mean wrapping up your feet in the infamous style of ancient China, but something developed by some mechanical engineers at the University of California, Santa Barbara.

In short, they attached some rubber tubing between runners shoes and found that they ran more efficiently.

Every stride, you slow your body down and speed it back up again,” losing energy that could otherwise be conserved or put into running faster, said Elliot Hawkes, who was a postdoctoral fellow at Stanford when the research was conducted. “90 percent of the energy you put into running is wasted, in a sense.

The solution to this, according to the researchers?

Tie the legs together with a rubber band. Adding that band between a runner’s legs could help slow both legs when they are far apart, then give them a little kick as they came back together–saving energy at both ends.

While they didn’t publish images of runners who weren’t using the rubber tubing, here’s what they showed for runners who used what they call an “exotendon”: 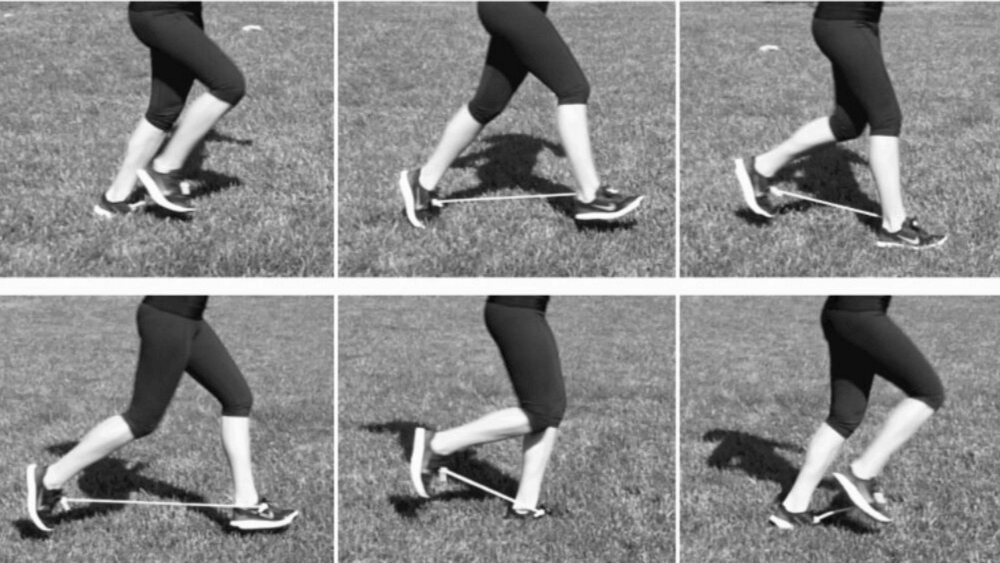 What was the effect?

An improvement in VO2 Max (what many people think of as running efficiency) by an average of 6.4%

But before you go out and buy an exotendon, let’s take a look at what’s REALLY going on here.

Can you see what the rubber band does?

Start by looking at the middle image in the top row, above.

You can see that the runner is about to land on their heel, with the foot relatively far in front of their body. This is a typical “overstriding and heel strike” pattern.

When you run like this, every time your foot hits the ground that far in front of you, you’re basically putting on the brakes. And when you land on your heel like that, research shows that you’re sending force into your joints rather than using your muscles, ligaments and tendons naturally — as built-in springs and shock absorbers.

Now look at the far right image in the top row.

The runners foot doesn’t actually land as far in front, or as much on the heel, as it would if it weren’t being pulled back by the rubber band.

You can see in the bottom row that the runners form has changed and isn’t overstriding as much, and is landing in a more mid-foot pattern.

Hopefully, I just saved you some money or time. No need to buy or build your own exotendon.

What the exotendon is doing is giving the runner a cue to run in the way that most people do when they get out of padded, elevated-heel, motion-controlled shoes!

Simply take the time to adapt to “natural running,” by landing with your foot closer to your center of gravity instead of far out in front of you, and land, ideally, on your forefoot (no need to STAY on your forefoot only, let your foot do what’s natural and use the springs built into it… your heel can drop to the ground if it feels right to do so).

BTW, while many barefoot runners say that either a midfoot or forefoot landing is what you want to do, research from Harvard’s Irene Davis shows that impact forces are lower with a forefoot landing than a midfoot one. So if you’re a mid-footer now, you may want to experiment with “moving up” to the forefoot.

Another thing that the rubber band did for runners: their cadence went up. That is, the number of times their feet hit the ground in a minute increased (without running faster). Obviously, you can do that on your own, too.

The researchers say that the exotendon only works when running on flat surfaces. Needless to say, you can use natural movement anywhere, any time, under all conditions.

To be fair, I’m actually NOT badmouthing the exotendon. In fact, it could be a great training aid to help people feel what a better movement pattern is like and make the switch.

But it’s important to know what’s really going on, what the real purpose of the device is. That could actually make it MORE effective, and wean you from it more quickly.

Frankly, I’m in favor of whatever it takes to help you Live Life Feet First.

Keep this one last thing in mind though — if you thought you go weird looks when you tried running barefoot, or even in Xero Shoes, just wait until you hear the comments when you strap a rubber band to your feet and hit the roads!