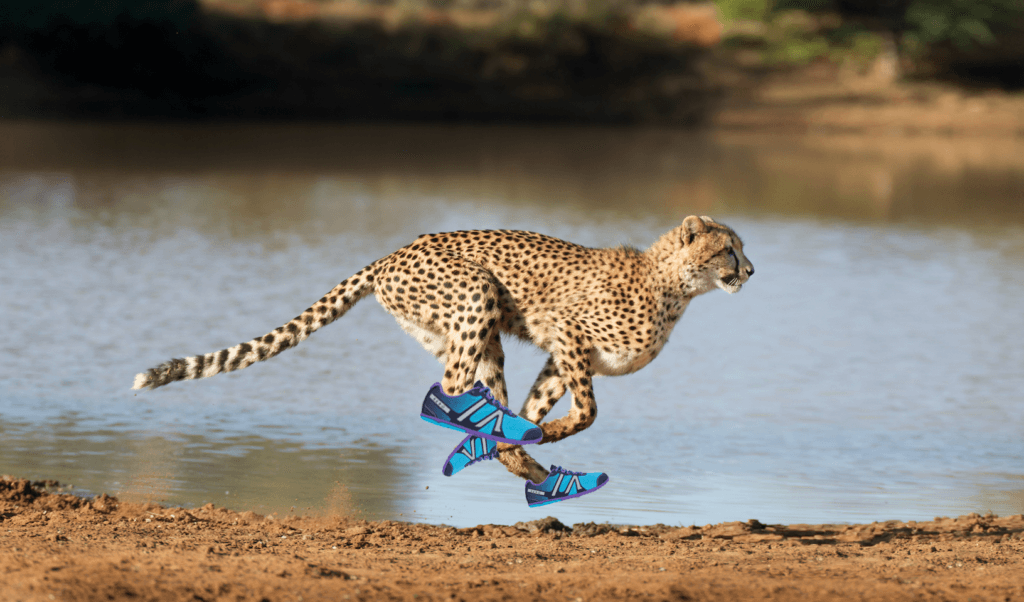 Introducing the Front Runner, the first shoe designed to improve the health and performance of rehabilitating cheetahs.

The design idea came from New York City Zoologist, Dr. Lex Rodriguez, after noticing that when cheetahs were released back into the wild, the paws of these magnificent cats were not able to handle sticker burrs, hot gravel, sharp rocks, and even the friction they develop by running at over 60 miles per hour.

Says Dr. Rodriguez, “I’ve worn Xero Shoes for years and it occurred to me that the protection, and ground feel you get from these shoes, could be effective for helping these animals transition back to their natural habitat.

When he was approached for this project, Xero Shoes CEO was instantly interested.

“I’ve been a competitive sprinter since I was a kid,” says Sashen. “So it’s not surprising that cheetahs are my favorite animal.”

The Xero Shoes team took their top-selling running shoe, the HFS, and quickly adapted it for feline feet.

Both Xero and Dr. Rodriguez were initially skeptical about how the animals would adapt to wearing footwear.

“We’ve all seen how domestic cats behave when they step on tape,” Sashen said. “They walk around trying to shake it off. We thought the big cats might react the same way.”

Dr. Rodriquez was more than pleasantly surprised by the initial results. “It’s amazing. They adapted almost instantly. It’s like they don’t even notice or feel anything different, but their performance tells a different story.”

Over the last 7 months, the Front Runner was tested on 3 cheetahs of different ages that were preparing for reintegration back into the wild.

Reports Dr. Rodriguez, “Wearing the shoes prevented their pads from becoming raw, so they were able to run longer, but they still have the same excellent balance and agility, and their toes can still flex and bend naturally.”

Most surprising, the cheetahs increased their top speeds by 6%.

The zoological research team is still investigating how the performance improvement happens, but the current theory is that the dual-chevron tread gives great traction, without the energy loss that occurs when claws have to dig into the ground.

Xero made one significant change between the running shoes they sell online—the Prio, Speed Force, and HFS—they added “Prey Slots” in the FeelTrue rubber soles to allow the cheetah’s claws to work naturally when the animal catches prey.

“There’s no value being faster,” says Dr. Rodriguez, “if, once you catch up to your prey, you can’t, well, finish the job.”

With just the right amount of protection, the Front Runner should enhance the cheetah’s ability to effectively hunt no matter what the elements, keeping the population of prey animals in check and ultimately—helping plant-life by preventing overgrazing.

Based on these results, Xero has been approached to develop performance-enhancing footwear for other animals, speedsters and otherwise, including those raised in the wild.

Says Sashen, furtively, “I’m not supposed to talk about our ‘skunkworks’ projects, but we’re working on shoes for ostriches, orangutans, and ferrets.” Preliminary results are expected by this same date next year.