The only time I’ve worn anything other than my huaraches or my sprinting spikes in the last 16 months has been the 3 times I put on my old running shoes… so I could shovel snow.

Those shoes have my $200 orthotics in them. And each time I’ve put them on, I have the same thought, “Geez, my foot can’t even move. How did I wear these?”

Often, when I’m out and about, someone will see my Xero Shoes and say, “Those look great, but I can’t wear them. I need orthotics.”

“I used to think the same thing,” I reply. “But let me ask you something. When has putting a cast on a limb and immobilizing it made it stronger?”

“Well… never,” they say, not wanting to admit the obvious fatal flaw in their reasoning.

“Right. So you put a cast on your foot, called an orthotic, it gets weaker. Then you need a new cast to handle how much weaker you’ve gotten, and then… Oh, by the way,” I mention, “you had your orthotic made while you were standing on a flat surface, didn’t you?”

“Look at the shape of your shoe. Is it flat?”

“Because of how the shape of the shoe influences the way you move, you really need a different orthotic for each shoe. And it needs to be fitted based on how you move in that shoe, not how you stand, motionless, on the ground.”

“Hmmm…” I can see the glimmer of realization in their eyes.

Well, now I have new ammunition in my anti-orthotic holster, an article in the New York Times by one of my favorite science writers, Gina Kolata: Close Look at Orthotics Raises a Welter of Doubts

Let me give you a few highlights:

Shoe inserts or orthotics may be helpful as a short-term solution, preventing injuries in some athletes. But it is not clear how to make inserts that work. The idea that they are supposed to correct mechanical-alignment problems does not hold up.

There is no need to “correct” a flat foot. All Jason needs to do is strengthen his foot and ankle muscles and then try running. without orthotics.

Who knew? 😉 Well, *I* did… I’ve had really flat feet my whole life… until I started running and walking barefoot. Now I have some arch in my foot. BTW, I’m legally required to say that barefoot running shoes and sandals are not a medical treatment, I’m not a doctor, nor am I able to promise that by going without shoes you will develop arches in your feet. That said, do some Googling and you’ll hear a lot of similar stories. Do with that what you will.

Sometimes people with high arches give me the same story. “I need support because my arches are so high.” Just because they’re high, doesn’t mean they’re strong, especially if you’ve been supporting them all your life… remember the cast analogy.

Now I’m not going to say that orthotics don’t do something. But the question is: What do they do? How do they  do it? And are they really helping.

I guess the main thing to note is that, as biomechanists, we really do not know how orthotics work.

Results from his studies cause Dr. Nigg to add:

There was no way to predict the effect of a given orthotic.

Hey, I’m not here to make anyone throw away their high-priced foot supports even though I haven’t worn mine since 2009.

But I am here to inspire a bit of wondering, a bit of curiosity, a bit of common sense, and a bit of critical thinking.

Man lived without orthotics for a LOOOONG time. That doesn’t mean they couldn’t have benefited from them. But it means they got along without them. Maybe you can too. It doesn’t cost much — it time or dollars — to set up an experiment for one.

14 thoughts on “Orthotics vs. Barefoot Running” 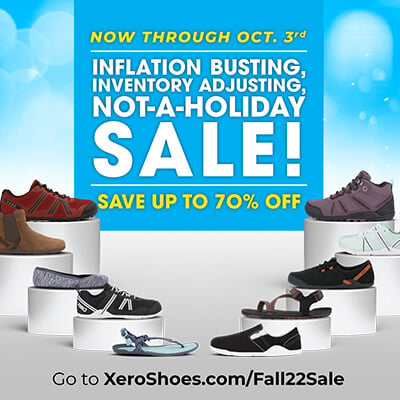