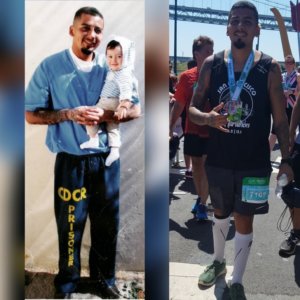 In April 2016, I was arrested. I then served time in prison and was released Christmas Eve 2017. After a year of staying on track, going to school and working I found myself going back to my destructive ways. I was partying, spending money, and binge drinking for 2 to 3 days at a time instead of going home to my family. Beginning 2019, I began to realize I was losing the motivation, drive, and inspiration that I felt after being released from prison. I also realized I had let himself go physically and had gained over 50lbs, causing some serious back problems. On March 15, 2019 I ran for the first time and was only able to run 1.88 miles. Two months later I ran my first half marathon, and 2 weeks after the first I ran my 2nd half marathon and beat my time by 9 minutes. On July 28, 2019 I ran my first full marathon in San Francisco and completed the 26.2 mile run at 4hr 58min. The marathon became something spiritual to me and lead me on a spiritual path. I did not think I would run again but after watching the documentary Skidrow Marathon, my friend Alex Flamenco invited me to help raise money and collect toys for homeless children in the L.A. area. We were able to get enough donations to give gifts to 97 children! I then decided that I would run 4 marathons in 12 months in 2020 to raise money and awareness for this cause. I had suffered a foot injury during my marathon so I decided to run on grass barefooted to see if it would help—which it did. Realizing while running that the children suffer every day of their lives, I have decided to run a full marathon barefooted to go through a small portion of pain that these children have to go through everyday. Coming from the heart, and not the ego, I hope to bring just a little joy into the lives of these less fortunate children.

Interests Running Socials
Back to Listings