Are barefoot shoes and sandals good for you? The simple answer is this: there’s no really good science that unequivocally says yes or no. I’m the first one to admit it and I’m the first one that if the science comes out saying that everything that I’m telling you is completely nonsense, I’ll be shouting that from the rooftops.

Let’s back up and think about this logically for a second though. I say this all the time: a quarter of the bones and joints in your body are in your feet. There are more nerve endings in the bottom of your feet than anywhere but your fingertips or your lips. Clearly, this is not an accident. Your feet are supposed to be used to bend, to flex, to feel things. If you don’t do that, what happens to the rest of your body? Your feet aren’t there just to be something that your legs can land on.

Back in 2015, my father died from a, sadly, way too common situation. He was 81 years old. He kind of shuffled when he walked. He hadn’t been barefoot in ages. He tripped on something, he fell down, he broke his hip, and two weeks later he was gone.

There’s no science to back up some of these things. I’m just asking you to think logically. We do have one 80-year-old customer who emailed us and said, “I read what you said about the magic vibrating insoles. I was looking for those but I found your article instead and decided to put it to the test, and I started going barefoot two weeks ago and I just threw away my walker.” So the simplest thing I can say is that your feet are supposed to be used. Use them. 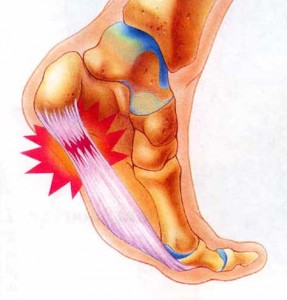 Plantar fasciitis is something that comes up frequently. People complain about plantar fasciitis. There are some doctors that recommend that natural movement is the cure for plantar fasciitis. The reason why is simply this: when you’re doing a bicep curl, you’re weakest when your arm is fully extended. You’re strongest actually about the halfway point. So extended is weak, contracted is strong.

Let’s look at your plantar fascia, which are along the bottom of your foot. When you land in a regular shoe; a big, stiff, motion control shoe, you’re going to typically land on the heel because with all that padding your body says, “Well, let’s just use that.” Whether it’s good for you or not, it just uses it. When you land with your heel outstretched in front of your body, you’re landing with your plantar fascia fully stretched, and when the foot comes down on the ground, when your plantar fascia are trying to flex, they’re in that weak position already. They can’t do their job.

If you’re landing more naturally, midfoot or on your forefoot, you’re actually landing with your plantar fascia engaged. It’s shaped like an arch, one of the strongest structure we know of. So when you use natural movement, you’re using your feet in the strongest way that you can, and we would argue that that’s good for you. We would argue that when you’re in a pair of sandals that let you feel the ground, the feedback that you get inspires you to change your gait into something that is more natural where you’re using your muscles, ligaments, and tendons as the natural springs and shock absorbers that they are rather than trying to rely on some silly technology to do the same thing.

Let’s have a talk about foam. I’m a former gymnast. I’ll never forget there was a time when they came up with a new trampoline bed. It was called an Aussie bed—I think it was basically plastic—and it was amazing. You could bounce so much higher on an Aussie bed trampoline. There was one thing that went along with that: you got tired so much faster. What it was doing was just allowing better transfer of your muscular energy into the bed and rebounding that, but you used more muscular energy.

Foam doesn’t work the same for everybody. Foam is kind of tuned in the same way that a trampoline bed is tuned. It’s designed so that it works for a certain weight at a certain speed, and I can guarantee you are not the weight and speed that the foam is made for. If you are, you’re lucky, but almost everybody else isn’t. The idea about barefoot shoes and about barefoot running sandals is simply that if you think about it logically, it would make sense that using your body naturally. Having something that fits your foot, having something that lets your foot bend and flex, having something that lets your foot feel, should be better for you.

Someday, I hope that we can end this argument and that we have the science that backs it up, but instead what you have to do between now and then is just use your brain. Think about it logically. Which seems like it would be better for your foot, something that’s stiff, and elevates your heel into an unnatural posture or something that lets your foot bend, flex and move naturally and feel the ground safely? Give it a whirl. See what happens. See what your experience is. Feel the freedom, feel the fun, feel the world.