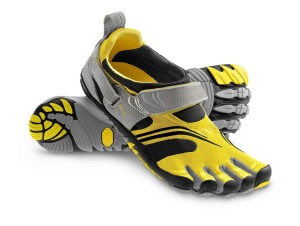 Big news today in the barefoot world: Vibram settled a class action lawsuit that claimed the company deceived customers when it claimed that VFFs would decrease foot injuries and strengthen foot muscles.

The company agreed to put aside $3.75 million to pay refunds of as much as $94 to anyone who had bought a pair since March 21, 2009, according to Runner’s World.

(Okay that was according to Runner’s World as reported by the Washington Post. The Post article was the one that showed up in my newsfeed.)

Vibram has agreed to discontinue to make any claims that FiveFingers footwear is effective in strengthening muscles or reducing injury in its marketing and advertising campaigns, unless the company discovers new scientific evidence that proves it.

This suit, and Vibram’s response bring up some interesting questions.

Is settling in any way an expression of guilt? Not according to Vibram:

Vibram expressly denied and continues to deny any wrongdoing alleged in the Actions, and neither admits nor concedes any actual or potential fault, wrongdoing or liability,” read the court brief.

While it’s true that settling a lawsuit does not equate to guilt, it’s kinda hard to argue that Vibram made the claims and, in fact, didn’t have scientific evidence to back them up.

This is similar to when Reebok and Skechers paid up after claiming their “toning shoes” would help you lose weight and firm up your butt. Those companies had to pay 25-40 million to settle their suits.

Is the settlement appropriate?

Let’s be honest, $3.75 million is barely a slap on the wrist for a company that sold hundreds of millions of dollars worth of shoes. In fact, this is barely a tap on the arm hair on the back of the wrist.

Agreeing to pay less than $4 million is clearly a payment just to make the case go away. Had they moved forward, the case could have cost tens of millions of dollars; so settling is usually a matter of cost-benefit analysis.

What about the claims? Are they true?

Well, here’s where it gets interesting. Many people online, including on our Facebook page are, I think, confusing the issue.

The question isn’t whether being barefoot or, in this case, somewhat minimalist, can be helpful. Or whether you can strengthen your feet and reduce injuries by ditching your shoes.

That’s been my experience, and we’ve received hundreds of emails from Xero Shoes customers who report the same.

But that’s not the point.

The point is: there’s currently no scientific evidence to back up the claim. And if you can’t prove it, you can’t claim it in your advertising. That’s the law. Making unsubstantiated claims can lead to “unfair enrichment.”

Ah, another interesting point. Shoe manufacturers have been making similar unsubstantiated claims for decades (more than Reebok and Skechers, mentioned above). But they haven’t been taken to task for it.

In my opinion, the only reason they haven’t had to pay the piper is that there were never enough people who got all in a tizzy about their claims. People, by and large, just write off shoe company claims that their shoes will make you bigger, stronger, faster, as hyperbole.

There was never enough mass, concentrated, public outrage to inspire someone to take action, like filing a class action lawsuit.

I think the sudden and meteoric rise in interest in barefoot running, combined with claims like Vibram made, created a “perfect storm” for this kind of situation.

Frankly, I’m surprised nobody has followed this with suits against other companies who’ve acted the same way.

FWIW, Lena and I have been as diligent as possible about not making health claims, despite our experience and that of our customers, just because we knew the law. In fact, the FTC has gotten more stringent in the last few years, where companies have to be careful about even letting customers report their own experiences, since those can, arguably, be interpreted as a way of making unsubstantiated medical claims.

Is this just another “McDonald’s coffee” case?

I’ve read this a lot.

People comparing this suit to the one where Stella Liebeck sued McDonalds after getting burned by spilling hot coffee on herself.

They say things like, “Hey, just because you went out too fast, too soon, don’t go suing Vibram for your stupidity.”

First of all this isn’t the same because the suit is a class action suit. Rarely do those result in windfall payments to the plantiffs.

Secondly, it shows a misunderstanding, a common one, about Stella’s suit. While people think Stella was just suing to make up for her stupidity, that’s far from the case. The real issue behind that suit was that McDonalds had admitted to numerous instances of heating their coffee too much, resulting in injuries to other people, and despite that, hadn’t taken any action to address the situation. More, people think Stella sued for and received WAY more money than she did. She just wanted her medical bills covered.

The point being, even if Valerie Bezdeck, who brought the suit against Vibram, sustained injuries after wearing her VFFs, that’s not the issue. The issue is: Can a company make unsubstantiated claims about a product? And while the answer is, “No,” Vibram didn’t have a day in court to argue this point.

If they had, though, it might have been tricky since perhaps the most well-known study seemed to show that VFF wearers are more likely to get injured than regularly shod runners.

I’ve previously commented on that study, BTW, and said that the real issue was the transition plan recommended by Vibram and followed by the runners in the study, compounded by the fact that the VFFs have enough padding that they decrease the sensations necessary to naturally change your gait (because you can’t feel what hurts until it’s too late).

Is this the end of barefoot?

This is the part that still irks me.

Any time there’s ANY news that suggests being barefoot and barefoot running will not improve your life, end world hunger, and land a man on Mars, it’s written as if it’s an episode of To Catch a Predator.

Granted, the Washington Post article doesn’t do this and, in fact, presents the reality of barefoot running perfectly:

Does Vibram being caught flat-footed mean there’s no merit to barefoot running? Absolutely not. There is conflicting research on the subject, but I’ve met dozens of people who gave up the sport because of leg injuries suffered in traditional running shoes, only to have their exercise regimens revived by the minimalist variety. In fact, I’m married to one. There’s a niche for flatter-soled running gear, just as there’s a market for people who prefer to drive Maseratis instead of Mazdas.

I would, of course, say barefoot is the Maserati in this analogy and that even though minimalism is currently a niche, it should be much more.

But I also agree that the research needed for us to be able to make the kinds of claims that many of us have experienced isn’t there yet. And, so, caution is necessary for those of us in the commercial space. And I am not claiming that your flat feet will develop arches the way mine did once I started going barefoot and in Xero Shoes.

What do you think?

5 thoughts on “Will Vibram Fivefingers make your feet stronger?”