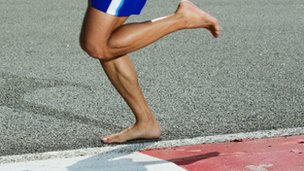 National Taiwan Normal University recently published a study in the journal, Gait & Posture, that might be the dumbest study ever done about barefoot running.

Or, now that I think of it, it maybe it’s the best.

Let’s start with the study and then I’ll tell you why it’s so stupid and so awesome at the same time.

The important part is the conclusion:

Habitually shod runners may be subject to injury more easily when they run barefoot and continue to use their heel strike pattern.

Winner of the DUH! Award

For those of you with some barefoot running experience under your belt, you’ll immediately get the “this is a stupid study” idea.

For those of you new to the barefoot thing, let me ‘splain. In short, the one of the key philosophies behind running without shoes is that the typical heel-striking pattern that most people adopt when they put on running shoes, regardless of how much padding and motion stability is built into the shoes, is BAD FOR YOU.

Adding the padding and motion control is attempting to address a problem that the shoe caused to begin with. It’s like drilling a hole in a water pipe and then trying to patch it up with Silly Putty and saying, “See, it’s fine!”

Another philosophy of barefoot running is that it’ll get you to stop heel-striking because, news flash, landing on your heel while barefoot HURTS.

There isn’t a barefoot runner on the planet who is surprised by these results.

Winner of the AAAAWWWWESOOOOMMMMME Award

Ironically, though, the obviousness of this study — problems and all — is what makes it one of the best studies about barefoot running yet.

Because it proves one of the core tenets of barefoot running!

Okay, again, it doesn’t unambiguously and completely prove it because of the limitations of the study. But by examining one of the simple ideas behind the barefoot movement and determining that all our anecdotal evidence has some scientific background, we can start to chip away at the nay-sayers who intone, “There are no studies that show that running barefoot is better for you.”

Ignoring the argument that there are no studies that show that SHOES are good for you, we now have a small study that backs up our claims.

Winner of the That’s What She Said! Award

One other conclusion that came out of this study is that, perhaps, the advantages that barefoot running seems to provide come not from having your bare skin on the ground, but from the change in gait — from heel-strike to, well, NOT heel-striking — is where the real value comes from.

That’s the message that many of us — including Chris McDougall, Daniel Lieberman, and Pete Larson — have been saying. That is, “it’s the form, not the footwear… but it happens that removing the footwear seems the best way to change the form… and it’s FUN, feels great, and costs less.”

Hopefully we’ll start seeing other studies that address some of the other simple claims of barefooters:

4 thoughts on “The dumbest barefoot running study yet?”