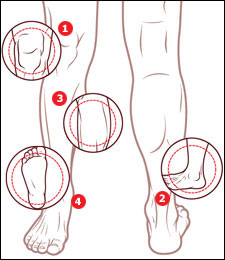 Imagine for a moment that you did extensive research into something, only to conclude that you need more research before you could make a meaningful statement about that something.

Is that news? I don’t think so.

Would any newspaper publish a headline: Scientists discover: We’re not sure yet!

Nope. No news is not news.

So, I’m once again dumbstruck by the latest article from the New York Times, “Is Barefoot-Style Running Best? New Studies Cast Doubt”

Let’s cut to the end of the article first, where it says:

None of this new science, of course, proves that barefoot-style running is inadvisable or disadvantageous for all runners; it proves only that the question of whether barefoot is best is not easily answered.

In other words, “Studies show we need more studies!”

Who are barefoot runners hurting?

To be fair, I’m okay with “Studies show we need more studies.” It’s not news, but it’s accurate.

So let me ask this: Why take what is essentially a barefoot bashing tack in the headline with “New Studies Cast Doubt?”

Sure, some people will argue that the headline is simply saying “Hey, we’re not sure.” But, is it really?

The clear implication is that there was proof that barefoot was great for you, and now science says, Not so fast!

This is like asking, “Do you know if your neighbor is a thief?” It’s not saying that your neighbor IS a thief, but it suddenly plants the doubt in your mind.

So, why the need for the mildly sensational and misleading headline?

If you’ve been reading this blog, you’ll know this is a pattern: Some small, constrained, or poorly-designed study suggests that we need to do more research into barefoot vs. shod running, and the headline says “Running Barefoot might ruin your credit and lead to bad hair days!”

It’s like: “All you people who think barefoot is cool… we’ll maybe you’re wrong.” Even if that’s true…

Now before we jump back to the end of the article, which says something I agree with — more study is necessary, let’s look at a couple of points in the article itself.

First, it comments on “the most definitive” of the new studies that says, in essence, “Landing on your forefoot is not as metabolically efficient as heel striking in in RACING FLATS!”

Oy. Where to begin?

First, is the idea that barefoot running = landing on your forefoot.

That’s a straw man argument. Talk to those of us who’ve worked with thousands of barefoot runners and we’ll tell you that:

In other words, how they’ve defined “barefoot-style” for the sake of research isn’t how “barefoot-style” is defined by most of us who actually run barefoot and teach barefoot running (and who’ve given it a lot of thought).

Next, the study has the runners switch from forefoot to heel striking, or vice versa, to compare efficiency… while wearing RACING FLATS.

While this may be an interesting bit of info about heel-striking in shoes, vs. forefoot landing in shoes:

a) What does this have to do with BAREFOOT RUNNING?

b) The argument from barefoot runners is not that heel-striking is more or less efficient, it’s that heel striking can INJURE YOU.

Once again, the study doesn’t mention whether the runners were over striding or not, regardless of whether they were heel-striking or forefoot striking.

In other words, not all heel striking is the same. It’s possible, as I mentioned above, to land heel-first, but with your foot properly positioned under your body in a way that doesn’t cause that impact transient force spike.

In short, the variables (heel-striking vs. forefoot striking) and the measurement of them were too limited to come to a definitive conclusion… oh, right, that’s what it says at the END of the article, after suggesting in this section that barefoot is bogus.

Next, the article  says that 5 studies showed that switching to minimalist, barefoot-style footwear did not improve efficiency.

a) How many times do I have to say this: Barefoot-style and minimalist are not the same as barefoot!  Most of the minimalist/barefoot shoes that are available are about as close to barefoot as a pair of stilts. Just because a product SAYS it’s “barefoot” doesn’t mean it is.

b) Xero Shoes are consistently rated as the closest thing to barefoot (we were not tested in these studies)… and even our “barefoot sandals” are not the exact same as barefoot, because you feel the same sensation — the rubber sole — rather than the myriad varied sensations you get when you’re totally skin-to-the-ground.

c) What’s the big deal about efficiency? As one commenter pointed out, there are more than a few world champion runners who forefoot strike. Clearly their lack of efficiency hasn’t hurt them!

Then the article adds, “The news on injury prevention and barefoot-style running is likewise sobering.”

Again, the implication is that here’s some big news that’s about to tell you that running barefoot will kill you in some way. But what’s the “sobering” news?

It’s the BYU study that we previously ripped apart, and an informal poll where 1/3 of the participants at the annual meeting of the American College of Sports Medicine had “tried barefoot-style shoes” and 1/3 of them had “suffered injuries” that they ATTRIBUTED to the new footwear.

So, now it’s not barefoot-style running, it’s the footwear itself that caused the problems? Make up your mind.

Or, better, THINK a little

If only 1/3 of the people who went minimalist got injured… THAT’S BETTER than the average!

And  what about the happy barefoot runners?

I’m the first one to say that anecdotes are not the same as data. A story is not the same as research. (Unless, of course, you’re at the ACSM meeting, where a poll of people who claim that barefoot running hurt them — even though most of them probably never put their bare skin on the ground — counts as something worth publishing)

But that doesn’t mean one should ignore the thousands of stories — we get at least one every day — from people who took off their shoes and were able to run pain-free for the first time in years.

Further, there are many reasons to get out of your shoes beyond being able to run fast, or run efficiently, or even to run at all.

Why is running touted as the barometer for all things barefoot?

And, speaking as a sprinter — I don’t even like to go around the turns on a track, let alone do a 5k for the charity du jour — why is distance running the be-all-and-end-all of running?

Who is paying for all this “sobering” research that, when push comes to shove, is only saying, “we need more research”?

We know there’s a bias when labs are funded by companies with a vested interest in the outcome. When a lab studies Product X, and that same lab receives money from Product X’s manufacturer, a disproportionate percentage of the results endorse Product X. When the same studies are done at labs that don’t receive funding from Product X’s manufacturer, WAY less frequently do the studies endorse Product X.

The media is usually fast to point out when a drug study came from a lab that receives significant funding by the company that manufactures the drug in question.

I’ve seen none of that reported in the “barefoot is EVIL!” articles.

Do we think reality is any different when we’re talking about feet and not pharmaceuticals?

I know of more than a few labs that have received significant amounts of revenue from Nike, Adidas, and Reebok. Do we actually think that running studies are less influenced by money from “Big Shoe”?

I’m a scientist at heart. I’m interested in the facts.

If I saw a GOOD study that said running or walking barefoot will decrease your Donkey Kong scores and cause hair to grow on your knuckles, I wouldn’t argue. I’d weigh the value of video games and hirsute hands against the fun and freedom I feel when I’m out of shoes and either barefoot or in Xero Shoes.

Until then, I guess I’m destined to rant about studies with bad or no controls, and reporters who get all hyperbolic just to get readers, when all they have to say is, “Wouldn’t it be great to do more research into this barefoot running thing?”

One thought on “The Death Of Barefoot Running”