While the 2020 Tokyo Olympics are postponed until next year, now as great time to look back at one of the moments that helped shape the modern barefoot running movement.

It was 60 years ago that Abebe Bikila won a gold medal in the Rome Olympics running in bare feet. 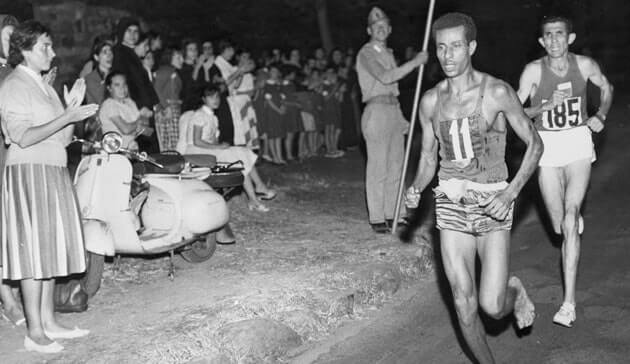 A great article called OLYMPICS FLASHBACKS: THE SCIENCE OF BAREFOOT RUNNING AND WINNING GOLD shares the details, many of which people don’t know.

For one, Bikila didn’t plan to run in bare feet.

The shoes from his footwear sponsor gave him blisters so he decided not to wear them.

The article also talks about how:

In the past two decades, emerging research and Christopher McDougall’s 2011 bestseller Born to Run kicked up a fiery debate about the merits of barefoot running. Some experts argue modern running shoes hamper humans’ natural stride, while others say they are vital training tools to prevent injury and stabilize the foot.

While there’s no arguing that the debate is “fiery,” when the barefoot vs. shoes conversation is presented, it’s often done as if the two sides are evenly matched.

There’s no question that modern shoes affect people’s stride. Research from Dr. Irene Davis at Harvard, and many others, repeatedly show this, and how shoes may even CAUSE the problems that they claim to cure or, at least, don’t help the way most people expect after reading the promo material from the manufacturers.

This shoe is marketed as “Designed to reduce injury” and “In an independent study, the shoe reduced injury rates by 50%.”

(I had a photo of their in-store marketing, but I can’t find it 🙁 )

Well, both are true… ish.

Of course ALL modern performance shoes are designed to reduce injury. Nobody makes or sells a shoe that they know will cause MORE injuries.

The independent study was designed by and funded by Nike.

The 50% injury reduction is a way of hiding the actual numbers — over 30% of the runners in the 12-week study wearing Nike’s best-selling, motion-controlled, padded, elevated heel, flared sole running shoe got injured, while “only” a bit over 14% got injured in the new shoe.

Think of it this way, which restaurant would you go to: The one that promises you’ll only get food poisoning in one out of 3 meals, or the one who says only 1 out 7 will make you sick?

Back to the uneven debate — When the “pro-barefoot” crowd makes their arguments, they can site studies to back up claims about reducing impact forces, reducing forces through the joints, etc.

But the “anti-barefoot” side often cites “anti-barefoot studies” that, often, they paid for and that, often, are researching factors that are “straw men” (arguments that no barefooter ever made, like “barefoot running improves VO2Max”).

Using the example from the article about stabilizing the foot, it would be EASY to show a study that some shoe stabilizes the foot… IF that study existed.”

Of course one challenge in creating a study about stabilization is that the design elements used to “stabilize” the foot — e.g. foam, typically — break down over time.

Plus, there is ZERO evidence that the foot typically needs to be stabilized. Pronation, for example, is not correlated to any injury.

I was on a panel discussion at the American College of Sports Medicine, where a representative from Adidas said that while their goal is to reduce injury and improve performance, they had no data showing they could deliver these benefits because doing so would be time consuming, expensive, and have many confounding factors.

If any major shoe brand could demonstrate scientifically that their shoe was better than that of another major shoe brand, that would be worth BILLIONS of dollars per year.

To say that they haven’t proven they can improve performance and reduce injury because “it’s hard” is ludicrous.

At best, what happens now is someone wins a race in a new shoe and other runners become so worried that the shoe may have been the causal factor in the win, and they all buy that shoe out of fear they’re missing out on a competitive advantage. And then other shoe companies rush to make similar shoes out of the same fear!

Look, it’s true there isn’t a study that proves that running naturally, either barefoot or in truly minimalist shoes, is better than being in shoes.

But that IS because doing such a study is expensive and time consuming and has confounding factors — all of which could be overcome, of course, with the kind of money that “pro-barefoot” companies like Xero Shoes simply don’t have.

And the question is, “Why haven’t the big shoe companies funded that study?” If they did, and the study landed in their favor, it would shut up people like me, and the millions who’ve found that natural movement was helpful for them.

But I’ve heard from executives at some of those “Big Shoe” companies who believe that natural movement IS better, but that they can’t make shoes like Xero Shoes since that would be “against brand.”

Frankly, that was a tangent from the important bit: Read the article about Bikila. It’s a great reminder of how what’s possible is often much more than what we imagine (or are told).